For this tutorial we are using a simple Processing sketch that writes three random numbers to a text file (.txt) in the sketch folder. Each time the code runs it overwrites the previous version of the file.

Copy the Processing code from this link. Paste it into an empty Processing sketch, and save it as Random_number_to_file

Since we only want the code to run once every time the PI starts up, we write our code inside the setup() function in Processing. We also uses the exit() function as the last thing in the code to make the program (sketch) exit when it is done.

Install Processing on the Raspberry PI

Open the Terminal application on your Raspberry PI and run the following command to install Processing:

Processing should then be downloaded and installed. NB: You will need a internet connection for this to work…

CRON is a built-in scheduling service that allows us to execute commands and scripts on a time schedule. You can set up these schedules from the terminal through a text editor.

Before we get started with CRON just a bit of helping info regarding timezone interpretation. We have experienced that CRON not necessarily follows the local timezone, or the universal one. Therefore we have here below posted all the location settings we used to make it work with the Copenhagen timezone. This is important since we experienced it can be difficult to guess which timezone CRON is using, or just confirm that it is using the one you expects it to do. 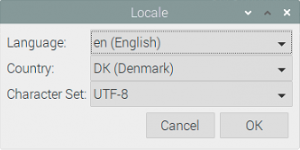 If you are in the same timezone, hopefully you will not have any issues using these settings.

Together with the Processing installation comes a feature (processing-java) for running the sketches with a terminal command. It is this feature we are using to run the sketches with. The command we are going to use comes here: DISPLAY=:0 /usr/local/bin/processing-java –sketch=/home/pi/Desktop/Random_numbers_to_file –run

Try to use it in a terminal window to see it working. You wont se much happening except a textfile being generated/updated in the sketch folder. Each time you run the sketch new numbers should be in the file.

CRON has a special notation for time scheduling that you can read more about here (link), and here is an editor (link) that makes it easier to generate the right timing sequence. The timing sequence consists of five slots (m h dom mon dow). Below are given three different examples on different timings.

Start by opening a terminal window and typing: crontab -e

If it is the first time using cron on this Pi you will be prompted to choose a text editor. We use Nano since it is fairly easy to use. Now go to the bottom of the text document that just opened in the terminal and write the first one: * * * * * DISPLAY=:0 /usr/local/bin/processing-java –sketch=/home/pi/Desktop/Random_numbers_to_file –run

Now close CRON (press ctrl+x). Every time the clock counts up one minute the sketch runs, and the text document (randomNumbers.txt) in the sketch folder is updated.

Try a few different timings until you get the hang of it.

This should open a file in the Terminal text editor nano.

Go to the bottom of the file and write or paste the following on a new line: @processing-java --sketch=/home/Desktop/Random_numbers_to_file --run

Now type the shortcut ctrl+x to exit the nano editor. When prompted to save the changes press Y.

Now try to reboot the Raspberry PI and see if the Processing sketch runs at boot, and changes the random numbers in the text file. You might be able to see a small squared sketch window open and close again. No matter if you see the window or not, you will be able to see the numbers change in the file, each time you boot up the Raspberry PI. After boot wait for a little while (about 30 sec), to make sure the autostart process han been running.

Setting up a Cron job to reboot the Raspberry PI

Now to the final step of automating the reboot.

In the following example we will set up a reboot of the PI once a day at the same time each day.

NB: If you are prompted to choose which editor to use for cron, type the number corresponding to the nano editor. If not disregard this info…

There are plenty of other options for timing tasks with cron you can read more about them here: raspberrypi.org/documentation/linux/usage/cron.md or by googeling cron scheduled tasks raspberry pi.

Warning: When you start to play around with this. Don’t put in * * * * * sudo reboot. This will make your PI reboot every minute. Since it takes some time to boot up, you risk loosing control of the PI, since you won’t be able to alter the CRON file again before the next reboot is starting. :-/