In this thesis, we investigate how we can use thermochromic textiles – a textile material with color-changing properties, in an interactive design, in order to explore the material composition between computer and textile. We want to uncover how we can practically apply the properties and qualities of the textile material in a concrete interaction design. The project consists of a longer design process. In the process, we have especially focused on prototyping, in order to be able to work with the material thermochromic textile, which is precisely the focal point for this project. 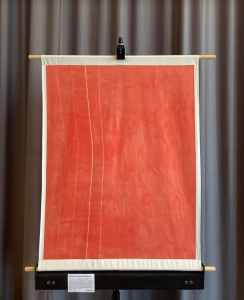 Slow technology has been the overall theoretical framework of this project, and we have applied the theory to understand the qualities of thermochromic textiles that were identified through the project’s work with prototyping. At the same time, slow technology provided a theoretical design perspective on how these qualities could be applied, namely in a reflection-promoting design.

Based on our insights from the study of the material and the slow technology philosophy, we designed an interactive tapestry, where we worked with an inner logic and an aesthetic expression through the material’s temporal expression, in an attempt to develop an interaction that invited the viewer to reflect. Next, we tested the design with five users to have the opportunity to understand how the interaction was perceived, from the users point of view. 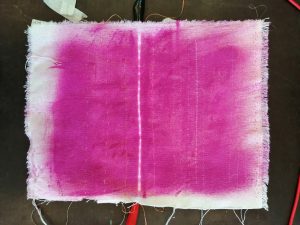 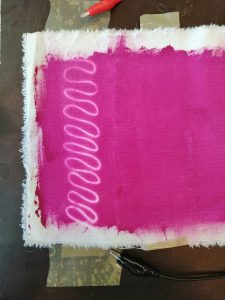 Our study revealed that the temporal expression of the material has a significant influence on its experiential qualities, and can be described as slow, fluid, delayed and unclear. The slow expression broke with the test participants’ expectation of the technology and created a wonder in which can be said to lie a reflection of the design and its purpose. In addition, several test participants described the tapestry as art, which also affected their perception of the context in which it was placed.
The context was described as important for the perception of the tapestry and the interaction, in which we see a potential for further work, as our study culminates in reflections on how the tapestry would be experienced in other contexts such as a museum or at home